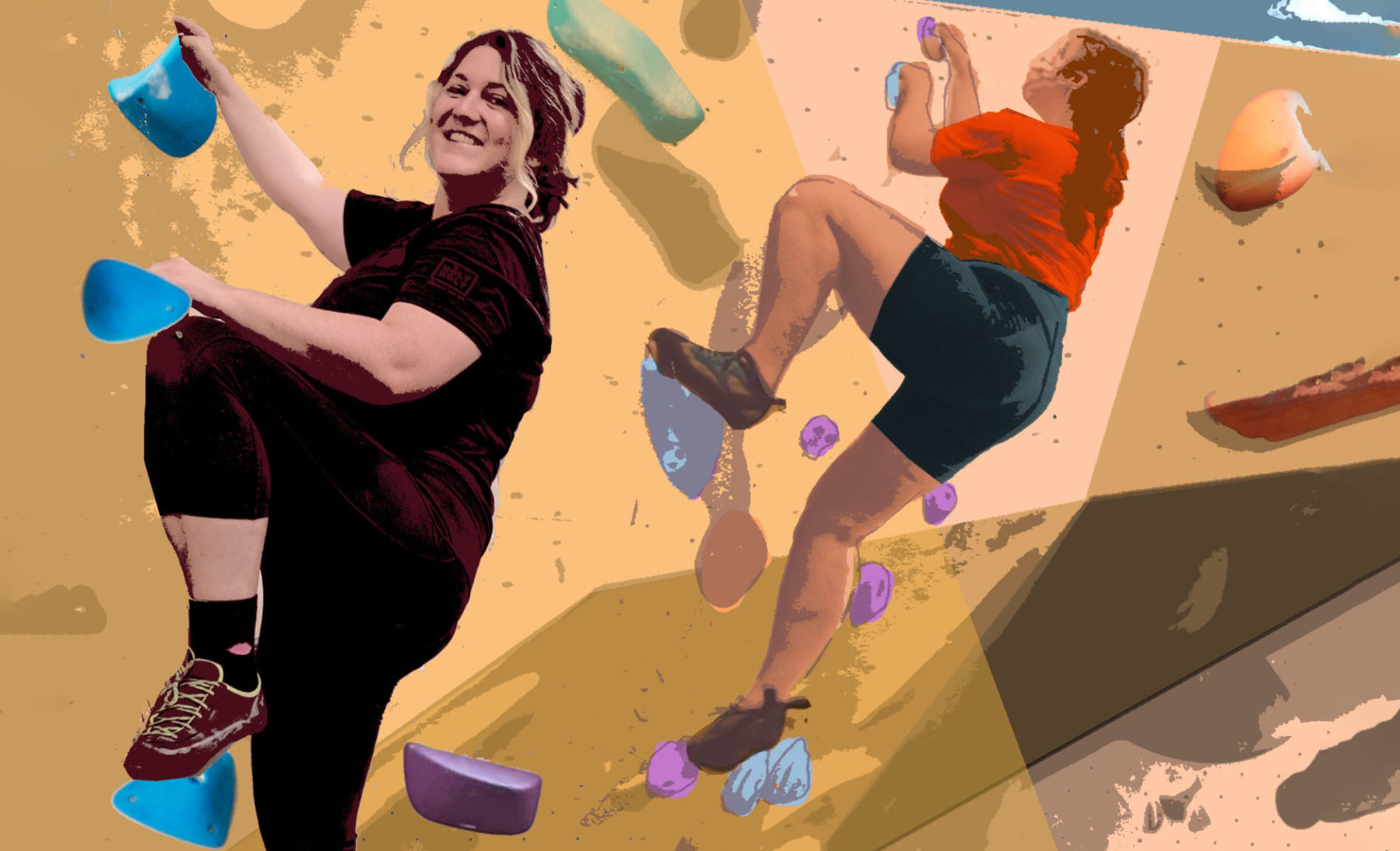 The Height Of Empowerment

Lying on a crash mat with my chest heaving and chalk dust forming clouds around me, I couldn’t stop laughing. I’d conquered a challenge that had been bugging me for weeks, and I was ecstatic. Punching the air, I couldn’t stop grinning. I’d finally found my sport as a plus-sized woman – and it was rock climbing.

For me, exercise was always about burning fat – it was for weight loss and never for pleasure. Exercise was meant to hurt, not meant to be enjoyable, especially for bigger girls like me. I’d spent years punishing my body with running (that I hated), simply to try to feel part of a society that had already rejected me for a body that I didn’t ask for. I had convinced myself that I didn’t deserve the pleasures of exercise, only the pain.

In 2019, my husband Jethro, now 27, signed up for a bouldering course at a climbing and community centre called Yonder that had opened nearby in Walthamstow, London. He suggested I join him and I laughed. I laughed even more when he told me it was climbing without ropes. “Me?” I spluttered. Climbing a wall in too-tight leggings and sports bra, with everything spilling out for the world to witness? I couldn’t imagine anything worse than panting and struggling up a wall, or hitting the crash mat like a sack of potatoes when I inevitably fell. Climbing was a macho sport for men who scaled cliffs topless with their bare hands, not for women – and certainly not for those who were so-called ‘plus-sized’.

But over the course of a few weeks, I saw a different side to my husband. He was like a child that had got a new bike for Christmas and could finally ride without the stabilisers. He was saturated with sheer ecstasy after every session of bouldering, invigorated with adrenaline and the pure unadulterated freedom of climbing. I was jealous, I wanted that enjoyment. I didn’t want to sweat and despise myself for it any longer, despise myself for not being good enough to fit into society’s perceptions of normal. So I joined him.

I won’t lie, I had many sleepless nights beforehand. What if the sheer weight of my limbs broke the handholds? What if I was the fattest person there – or the only woman? What if everyone watched and laughed at me struggling? When I arrived at Yonder I was a nervous wreck. I was convinced everyone in the waiting area was staring at my thunder thighs or bingo wings. Introducing myself to the woman behind the desk, I waited for her eyes to dart down over my straining t-shirt and bulging body, waiting for her to laugh, ask me what I was playing at and show me the door. She didn’t. She grinned and welcomed me with open arms, pointing me towards the beginners’ walls.

Craning my neck to see the top of my first wall, I felt my heart rate quicken. But it was too late to turn back. Looking around me, I was expecting every single person to stop and stare, as if I’d entered a saloon bar, but not a single eye was in my direction. Cloaking my hands with chalk, I climbed, I faltered and wobbled but I did it. Reaching the top, I felt my heart would burst. But I’d used up all my energy and I felt my hands slipping – there was only one way down. So I counted to three, scrunched my eyes together and jumped. Falling through the air, I’d reached my own version of happiness. I’d done it, and this feeling of free-falling after conquering something previously unknown and alien was addictive. I laughed when I hit the bottom, safely rolling onto my back and squealing with pride. My husband grinned and reached out his hand: “You got this,” he smiled.

Now, I’m a bouldering convert. I can feel my body getting stronger, and I’m unbelievably proud of it. Proud of the way it carries me to new heights once unexplored, and to the top. I no longer punish it with gruelling weight-loss goals, but envision myself getting stronger and wiser through problem-solving, risk-taking and confidence-boosting climbs.

I’m proud of myself as a bigger woman, too. No one looks at me climbing and thinks that I’m too fat. Yes, my breasts or stomach may get in the way of some trickier climbs but no-one cares. Other climbers look to me for route-mapping and inspiration instead, including women. Female rock climbers are my biggest inspiration and keep my drive burning, including the all-women climbing group, Bouldering DabRats. “Anyone from a minority community stands to gain so much more from climbing,” Annie and Di from DabRats tell me. “That’s why we’re so psyched to get everyone on the wall, because it’s the people who traditionally have been left out that have the most to gain.” Annie and Di set the all-women climbing group up two years ago, after a bouldering trip to Fontainebleau, France. “Our mission for Bouldering DabRats is to create a space where women can feel comfortable and empowered to be their “rad” selves,” they reveal. The pair, now with over 14.5k Instagram followers, decided to set up a Youtube channel that has garnered over 22k subscribers. By sharing videos of their climbing ventures, they wanted to inspire the curious, less confident woman to get chalked up. “We are both passionate about women in sports, especially in this sport that we love so much,” they state. “When we first started climbing, there was definitely a lack of female presence on the scene.

“It is intimidating to be a woman in a climbing gym when you’re just starting out. You feel weak in a setting that might already categorise you as weaker from the get go. “There will always be people who judge your strength and ability by your stature,” they said. Di added: “Being a short woman, I have been on the receiving end of countless unwanted beta sprays, groups of men who believe their project and time on the wall is more important and occasions when men will assume that I am weaker and less experienced just because I’m a woman. “There’s a constant pressure that we have to “prove” ourselves as capable climbers. But by sharing videos of women climbing, we wanted to motivate and dare I say, inspire other women to give it a go. We want to show that this is a space that we can comfortably be a part of,” they add. Thanks to women like Di and Annie, I’ve found my sport and my community. Yonder has its scores of female, trans, queer and non-binary climbers. The centre holds monthly Queer Climbs and strives to be a safe space for all.

“Climbing has historically been populated with white, straight men and the rest of us – women, queer, trans, BAME – have had to adapt to these social constructs already in place,” Di tells me. “But that doesn’t mean we have to accept them unwaveringly,” she adds. “As climbing grows its demographic, it’s up to the old-school climbers to accept and embrace the changes to include more into this amazing sport.”

And Josh Glanvill, Yonder Community Manager, agrees. “As climbing becomes more widely visible, through the Olympics, news coverage and the number of centres opening each year, we see greater efficacy from people that would have not had access to the sport previously,” he tells me. “In turn, this has shifted the culture away from the macho training elements and more towards the social, egalitarian benefits that climbing can offer. “We aim to be welcoming and inclusive to everyone, and that really starts with our team which is largely female-led and has BAME and LGBTIQ+ representation, but we won’t pretend to be perfect,” he says. “There’s still much to do and we’re working on hosting more inclusive events such as Queer Climb and Project One Origins as monthly sessions. We’re also un-gendering our toilets and running sessions for care-leavers and youth groups in the local area.

“I would like to see more done to invite people into climbing that are currently under-represented,” he adds. “Additionally I would like to see less gatekeeping as there isn’t necessarily a scale of authenticity in climbing and it should be seen as something people do for fun at their level without being judged for how they’re doing it. “We all had to start somewhere. Very few climbers come in and are instantly amazing, but as climbing is such a sociable sport, don’t be afraid to watch other climbers and ask what they’re doing.”

Thanks to people like Josh, and the Bouldering DabRats, climbing is gradually shedding its macho persona and becoming more of an inclusive community for people like me. And that includes bigger, less confident, unathletic women who have never really felt welcomed, or that they belonged anywhere. One day, I hope to start climbing outdoors or enter competitions. I’m not quite Olympic-level just yet but I’ve reached my version of happiness, and those who judge me have a long way to go to find theirs. Bouldering, and the unrivalled healing power of rock climbing, has helped me find my people. I welcome you with open, chalky arms to join the climb. 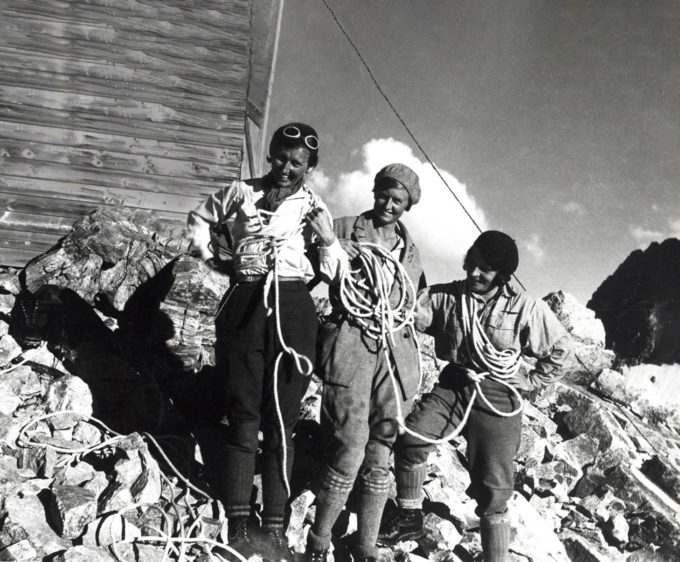 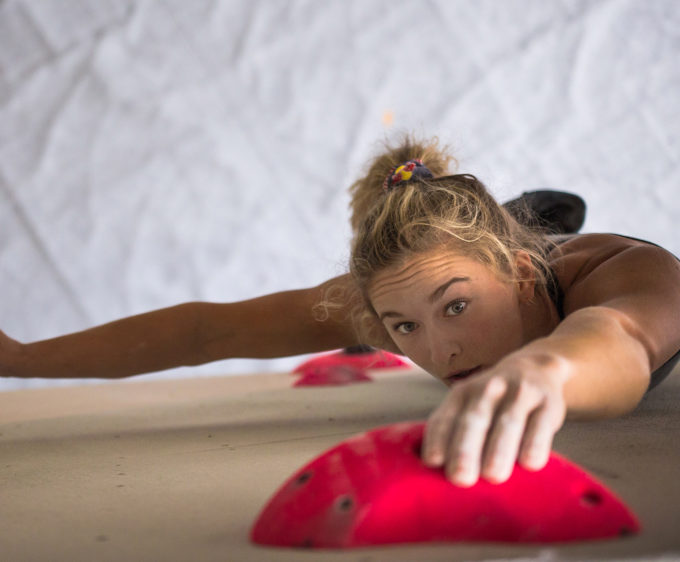 Route setters: Shauna Coxsey and Emma Twyford are leading the way in the UK to create opportunities for women in the climbing world 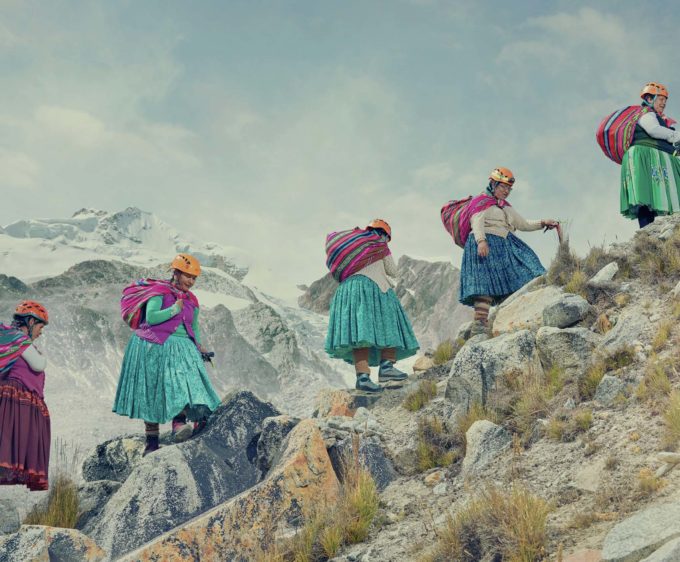 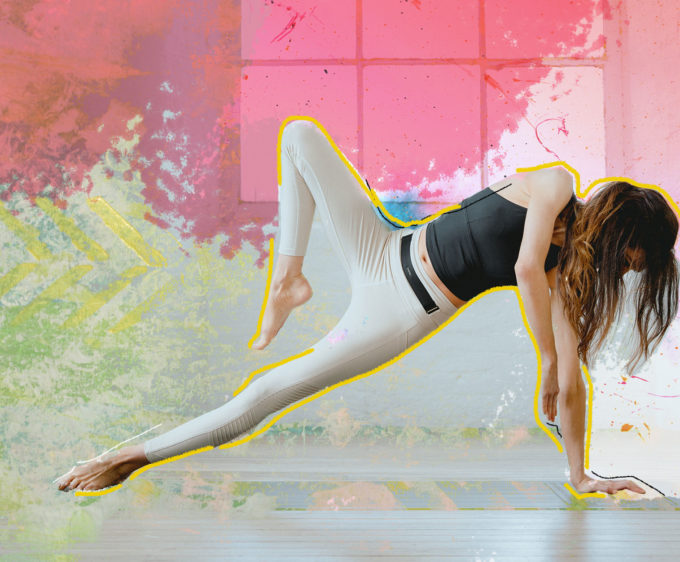