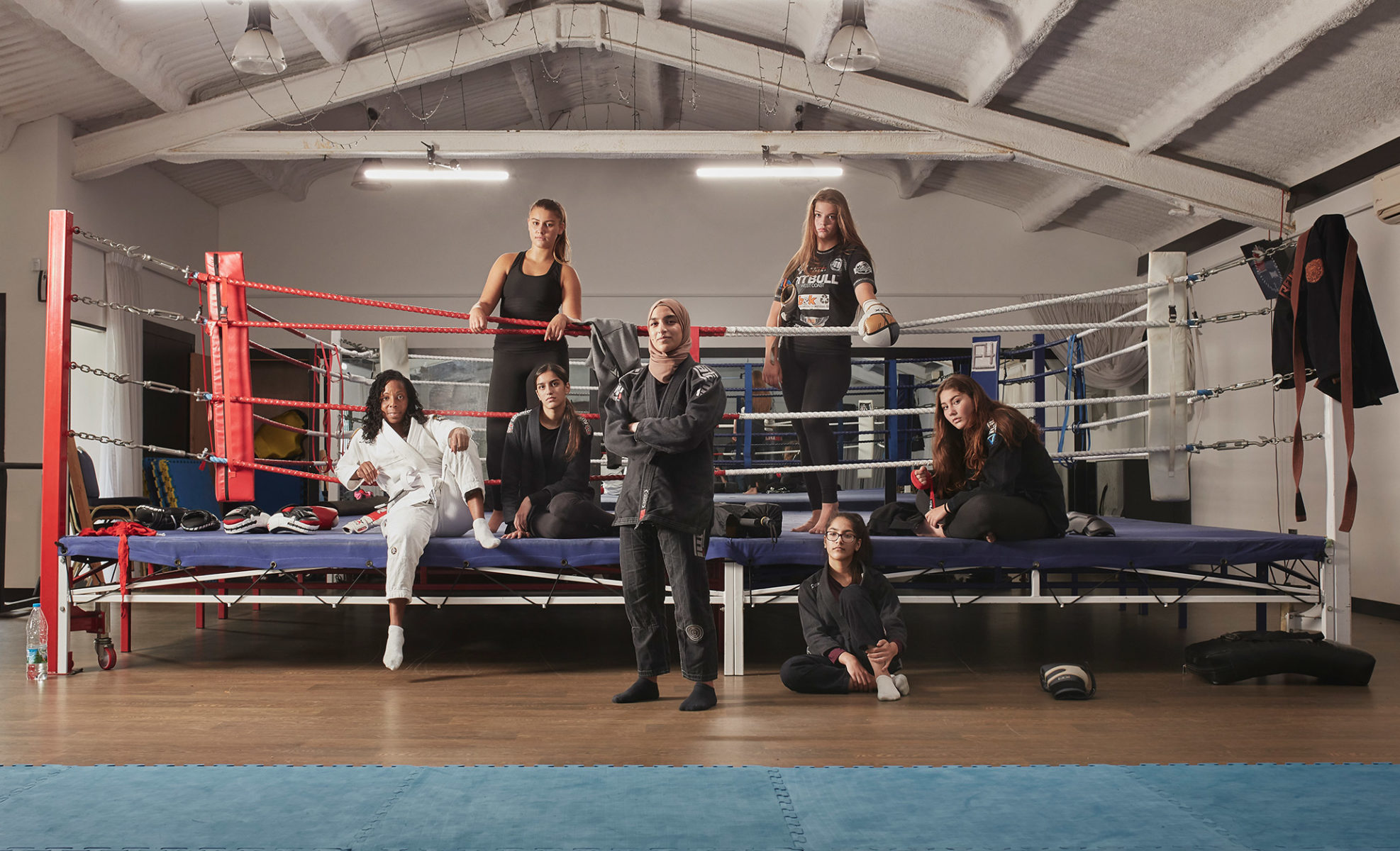 The satisfying thump of gloves smashing against a punch bag echoes throughout the room. Each perfectly timed combo of punches lands with a rhythm like a drum beat. Ayesha Sattar moves around the bag, darting in and out, to pummel it with successive combos, floating with a style, grace and confidence that’s rare to see in fighters of any gender. She’s wearing a black fighting jacket and a light beige hijab framing her face, which is locked in pure, steely-eyed concentration, focused right on her target. She feints to the left then unleashes with a right roundhouse kick; her foot connecting perfectly with the pad. As the slam echoes around the gym, you can hear its power. The chains suspending the bag from the ceiling rattle as it wobbles with the force of impact. Floats like a butterfly, stings like a bee? Yeah, that’s about right. 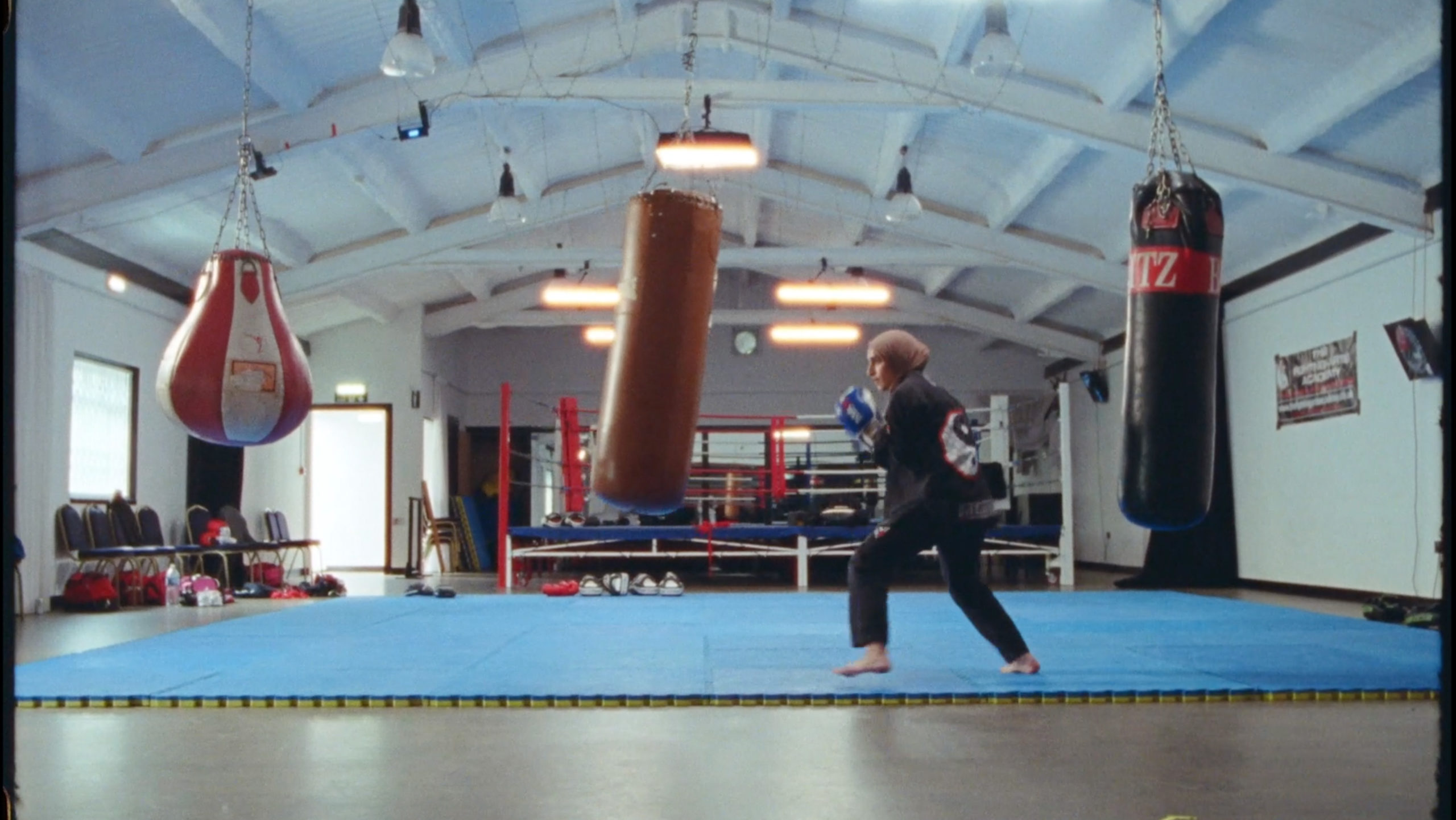 The Art of Mars.

Ayesha is part of an all-ages, diverse and multi-racial community of female Mixed Martial Arts (MMA) fighters who train at The Fighting Arts Academy in Highams Park, North East London. Together, they have created a safe, supportive and inviting environment where women of any age, background, identity or body type can feel welcome and learn to fight. Rather than being intimidated by physical combat, they want to show other women that Mixed Martial Arts are open to all. From fitness to self-defence and increasing confidence or acquiring new skills, Mixed Martial Arts has something to offer everybody.“Everyone always thinks that people who do MMA are brutes,” Ayesha explains. “But you don’t even have to be that strong, you just need to learn how to play to your strengths: you could be quick or flexible. I think that’s a big misconception. Fighting is not just physical, in MMA you actually have to think a lot about each move and it’s quite technical.”

Professional MMA can be brutal. Tune into Ultimate Fighting Championship channel and you’ll likely see two hulking men beating each other to a pulp inside a giant cage. There’s often blood and broken bones, which is the attraction for much of the audience on TV. But Mixed Martial Arts is a broad church and away from the bombastic televised pro circuit, you’ll find many practitioners who treat it more like an art form than a battle to the death. The contemporary Mixed Martial Arts scene evolved from Brazilian Jiu-Jitsu and Vale Tudo events in Brazil, where fighters have few rules but can draw on moves from a wide range of disciplines, from boxing, wrestling and Muay Thai, to Judo, Karate and Capoeira. Fights begin with both adversaries standing, punching and kicking, while trying to throw their opponent to the floor, where the grappling begins. The fight is won when somebody is pushed to submit.

“Egos get quashed very, very quickly here because although we’re very friendly, the level of our senior fighters is very high,” explains Darius, who co-founded The Fighting Arts Academy with his partner Marco Nigliazzo in the early 2000s. “You’ll have macho guys who come in from weightlifting gyms who don’t want to fight with women. But then they’ll get their ass handed to them by a teenage girl who’s a quarter of their size. Either they never come back again or they become totally humbled and stay.”

Darius grew up in Hong Kong and started Tae Kwon Do after being bullied at primary school, then got deeper into martial arts at university in the UK, such as classical Chinese Kung Fu, before being wowed by “the ultimate grappling sport” – Brazilian Jiu-Jitsu, which he now holds a brown belt in. Darius’ daughters Eleana aka Lilly, 18 and Maya aka Mimi, 16, have grown up training and fighting with their dad and now Lilly, who is in her second year studying medicine at King’s College, London, is a coach too, specialising in boxing. Together, along with multiple world champion Muay Thai instructor Yoddecha Sityodtong, with an open and compassionate approach, they have worked to ensure that it’s a space where everyone treats each other with respect, regardless of where they’ve come from before they got here. Everyone can test their bodies to the limit, without judgment – just support and encouragement. “I started this as a place where I could bring my own children,” Darius explains.

“The philosophy of the club is about taking the best bits of each culture. Everyone who walks in adds something. So long as you’re respectful and you want to learn, then you’re welcome.” Ayesha started training at the academy in January 2017 after karate became boring and repetitive. “From the very first second it was completely full on,” Ayesha remembers. “They just throw you into sparring with people straight away, which is scary but you learn really quickly and everyone is there to help you improve your technique and build your confidence.”

Just as there are misconceptions about MMA, there are widespread misconceptions about the restrictions Muslim women face when they participate in sport. Ayesha explains that couldn’t be further from the truth: she’s able to train and fight with her full force, all while conforming to Islamic teaching. Ayesha has always had the full support of her family, and after seeing how much fun she and her sisters Zahra, Imaan and Hannah were having, their father decided to give MMA a try as well. “For me, it’s just normal,” Ayesha says. “I have to cover, then I can do everything, except I won’t fight with the opposite sex. Islam is all about peace and we’re not primarily learning to fight, it’s more about fitness, learning new skills and self-defence. Everyone has always been accepting, supportive and have made it easy for me to be a Muslim, a hijabi and still carry on with MMA.”

Everyone comes to MMA with their own personal challenges and hang-ups. For Suzy Evans, she had always been active and played sport up until the birth of her daughter, but when she decided to take up MMA in January 2019 at the age of 50, she struggled after her decade-long break from sport.“When I started, the fear kicked in,” she remembers. “There were a lot of psychological issues I had to overcome. I was fighting the same thoughts every week: I’m not good enough, I’m out of shape, I’m the only Black woman, I’m too old. No-one knew my fears – I hid them, but I had built up all these barriers.”

Suzy battled through her frustration at not picking things up as quickly as she had hoped, but with encouragement from Darius and the group, she stuck at it, put in the hours and carried on pushing until, little-by-little, she started to see progress. Now, she’s an increasingly confident fighter, has set her sights on getting her blue belt at 55 and has brought her daughter along to train as well. Young or old, you can bring baggage to the ring – and fight your way through it.

Martyna Przybylska was born in Poland and has already had to deal with more than most other 16-year-olds, such as being bullied and caring for her mother through illness. “People at school, especially the boys, would be nasty about the fact that I’m tall and a bit different,” she explains. “But now everyone knows I train in MMA and I’m bigger than most, so the boys are genuinely scared of me. I’m not aggressive, I don’t go around picking fights, but it does feel good to be respected now.”

Last year Martyna travelled back to her homeland and spent three months training full-time in MMA. Her dedication to the sport is paying off as the teenager went on to collect gold at Poland’s ADDC grappling competition in the Juvenile +65kg category and another Gold in MMA (Juvenile +66kg) at the Polish ALMMA competition. It’s not just learning to fight that Martyna credits with helping her through a difficult period in her teenage years. But also having Darius and the other coaches listen to what she has been going through and being there for her when she needs them. “I can’t imagine my life without MMA: I go in angry and I come out happy,” she says. “It has really helped me both physically and mentally. There is a family feeling at The Fighting Arts Academy. Darius cares, you can see it, and the coaches have done a great job at helping women feel safe and comfortable.”  Most recently, the academy produced an outstanding team performance at the London Pro AllStars BJJ Competition, finishing second and third in the junior and adult section respectively.

Ayesha now has her fair share of medals after competing, mainly in Jiu-Jitsu meets. “It can be quite an emotional day; at first I was so nervous I was shaking,” she says. “It’s hard to fight in front of so many strangers. But you focus on the fight and forget about everything else, then when you realise you’ve won it’s a fantastic feeling. Competition is a great learning experience and it’s fun to be there with everyone, cheering each other on.”

At the time of writing, Ayesha is now in her second year studying medicine at St George’s, University of London but will occasionally come back home to train, so that she can maintain a connection to her extended MMA family – and expel the stress of studying. “You forget about all the pressures of the outside world and just focus on your breathing, body and techniques,” she said. Whoever they are, whatever reasons each woman might have to come and train, and whatever they hope to get out of it, the group is united in their determination to make Mixed Martial Arts inviting and accessible to all. “Once you join in, everyone feels welcome,” Ayesha reflects. “But having this diversity makes people feel more comfortable about turning up to give it a go. If you don’t think there’s space for you, you won’t even consider joining.” So, does she hope that seeing her train and compete will encourage other young women like her to get involved? “I’m not sure how much impact I can have,” she says. “I just want to tell my story: anybody can do MMA. It’s open to everyone.” 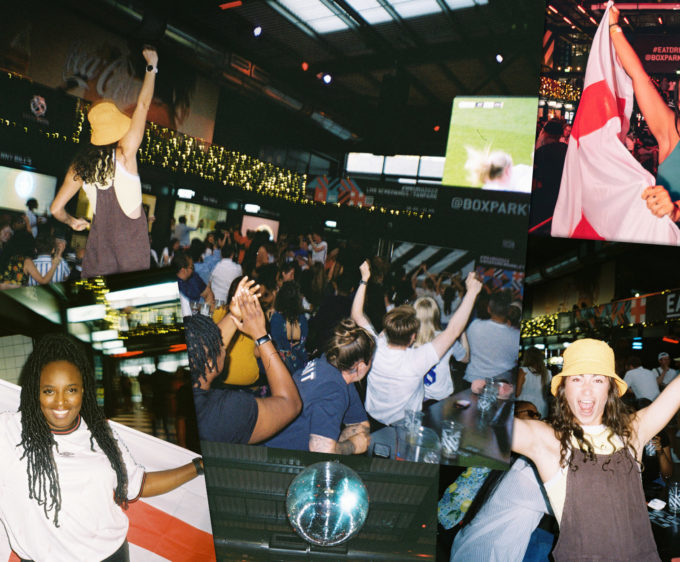 Emily Spiller had no interest whatsoever in women’s football, but the Women’s Euros have opened her eyes to the beautiful game and she explains how she became hooked and why her support won’t stop 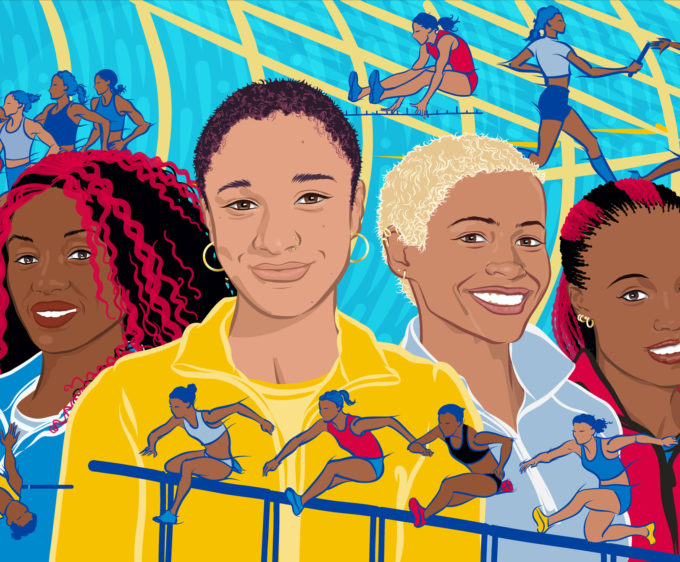 After Kenyan athlete Agnes Tirop was killed by her husband, fellow female athletes decided to act. Forming a platform, the Women’s Athletic Alliance, they raise awareness and help others move forward 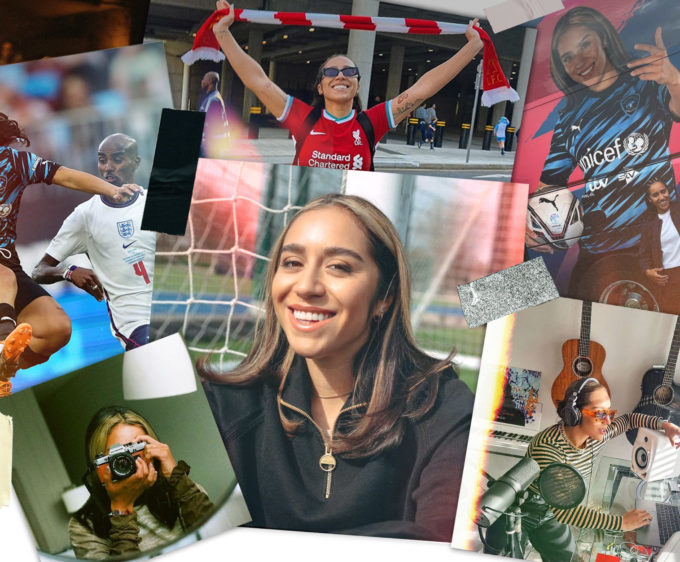 The Women's Euros has kicked off football fever. Singer, songwriter and passionate footballer Chelcee Grimes tells us what the game means to her and how much she owes to the female players of 1895 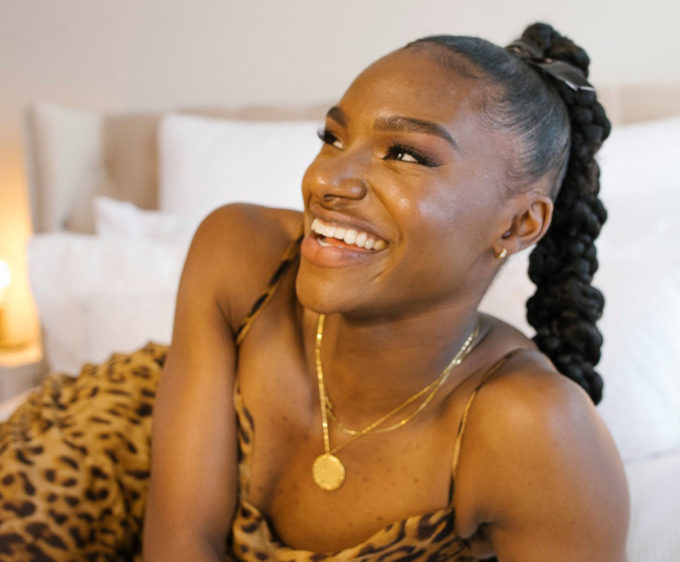 Blurring the line between fashion and sport, Dina Asher-Smith, the fastest British sprinter in history, talks to us about the transformative power of clothes and the confidence they bring