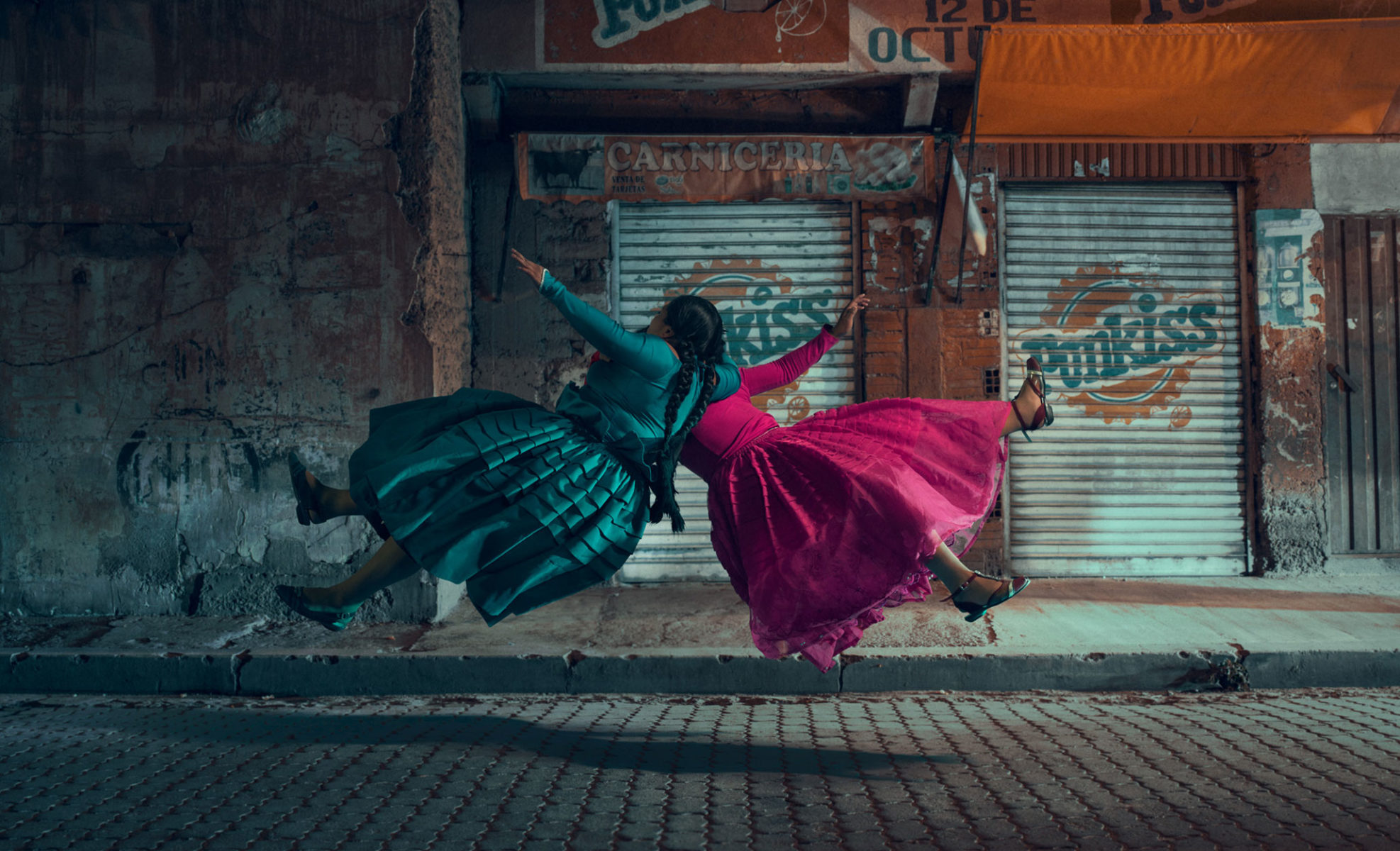 Almost weightless, two women are wearing brightly coloured clothes in pinks, greens, and blues – their dresses like flowers in bloom. Their muscular calves and buckled shoes peek out from lacy underskirts and in some shots, those shoes don’t touch the ground. Look closer, and you’ll notice that the women’s hands grip each other’s shoulders, their bodies push and pull, until suddenly, you realise, the women are wrestling. You can almost imagine their bodies slamming into the street just seconds after the shot, but you never see that. Instead, you’re enthralled by the fact that these women are wrestling mid-air.

Todd Antony’s photographic series, ‘Flying Cholitas!’, features a group of Aymara wrestlers, known by the same name in El Alto, Bolivia (next to La Paz). The Aymara people are an indigenous nation in the Andes of South America, and among them are Cholitas, who can be identified by their colourful tops, bowler hats, plaited hair, shawls (‘manta’), and large skirts (‘polleras’) with visible, colourful underskirts. During Spanish colonisation, ‘cholo’ (for men) or ‘chola’ (for women) were derogatory terms used by the European conquerors for the Aymara people. The Europeans also made the Aymara people wear European-style clothing, which has evolved into the outfits you see the Cholitas wear today. Like the clothing, the term ‘Cholita’ has evolved into a positive and empowered term, but it doesn’t negate the fact that Cholitas were oppressed by Europeans for centuries. Even a few decades ago, they could not walk freely in the capital of Bolivia, enter restaurants, or take public transportation.

In the early 2000s, a rising demand for indigenous rights saw the Cholitas at the forefront of a political and social movement. It resulted in the country’s first indigenous president, Evo Morales. Once groups of Cholitas felt more empowered, they came together to pursue passions, including sports. Todd Antony didn’t know any of this when he came across a small photograph of Cholitas climbing a mountain in 2019. “A little thumbnail popped up of the ‘Cholitas Escaladoras’ taken with a really bad camera.” Todd learned there were a variety of Cholita athletic groups – even ones that skateboarded – all of whom wore their traditional Cholita dress while being active. He was especially drawn to the Cholitas Escaladoras and the Flying Cholitas, and decided that his next personal project would be two separate photoshoots of each of these groups.

“The Flying Cholitas shoot did require a bit of magic. It’s always tricky when you’re going into someone else’s neck of the woods to make sure you’re representing them authentically; how they deserve to be shown,” Todd said. To tell the Flying Cholitas’ story authentically, he looked to magical realism. Todd had discovered magical realism years before when he came across an article on how the genre was presented in the TV show ‘Narcos’ and other Latin American media. Magical realism is an artistic genre that erupted, primarily in literature, in Latin America in the 1960s, and became a worldwide phenomenon with the publication of Gabriel Garcia Marquez’s book ‘One Hundred Years Of Solitude.’ Magical realism is exactly as the name suggests – it seeks to combine realistic elements with those that are magical or fantastical.

Although people from many cultures and communities have adopted magical realism to tell their stories today, it’s inextricably connected to a Latin American perspective, which Latinos contend is a magical one in itself. It was also historically used to critique power dynamics, social issues, and European colonisation in Latin America. If you take a look at the ‘Flying Cholitas!’ photographic series, it’s quite easy to see how magical realism is at play. The Flying Cholitas are floating as if by magic, and yet, they remain in the very realistic setting in the neighbourhoods of El Alto. So how did Todd do this? It started with an idea. “I wanted to take the Flying Cholitas out of the ordinary; out of the expected,” Todd explained. When shooting wrestlers, the ‘expected’ place to shoot them would be their ring. But Todd wanted to find a way to capture the Flying Cholitas’ wrestling prowess in the streets.

Todd first went in search of engaging backdrops to shoot at night. He captured crumbling stone buildings, a closed carniceria covered in Ponkiss advertisements, metal and wood fences, and an empty construction area that overlooked the sparkling lights of La Paz below. For the second part of the shoot, Todd set up a wrestling ring in a local auditorium, took off one side of the ropes, and hung a truck canvas from the ceiling on the backside of the ring. He made sure the lighting was the same as it had been when shooting the backdrops. The Flying Cholitas then stepped into the ring and began to wrestle. With a high-speed flash, Todd captured the flips and tricks of the wrestlers and, later, superimposed their bodies over the background images. The result is, as Todd had hoped, magical. In many photos, the Flying Cholitas appear to be wrestling mid-air in the streets of El Alto. Their colourful clothes contrast the stark backgrounds and dim lighting, making for a wondrous scene. While the artistic concept came from Todd, the ‘Flying Cholitas!’ series wouldn’t have been possible without the expertise and shear strength of the Cholita wrestlers.

“They’re quite incredible,” Todd recounted. “The heading was plywood and a canvas; there was nothing else underneath it, no padding. But they just kept going and going, and got up very quickly.” The fortitude of the Flying Cholitas is something that impressed the photographer. “First thing you notice about them as they arrive at the stadium is that they’re the ones building the wrestling ring,” he explained. “It’s made of steel and plywood so it’s not the lightest thing in the world and they’re pretty diminutive to be carrying around that stuff.” The wrestlers’ strength extends beyond the ring and is one of the reasons Todd wanted to capture the Cholitas in the first place.“The wrestling group was originally started to help a number of women who had been suffering spousal abuse at home. The sport helped release some of their aggression. That’s a pretty sobering experience,” he said.

It’s perhaps no surprise that Todd has received a lot of positive feedback for the ‘Flying Cholitas!’ and ‘Cholitas Escaladoras’ photographic series.“This one seems to have really struck a chord with people and opened up dialogue. I’ve had so many Bolivian people DMing me on Instagram. They’re really proud and happy to see that they’ve been represented,” he said.

Todd recounted a time when he received a message from a Bolivian woman living in Hawaii who pointed out a certain way that Todd used the term ‘Cholita’ in a social media post. The constructive feedback helped Todd to better understand the Bolivian culture and helped him to adjust his phraseology to represent local language nuances more accurately. Experiences like this made the photographer more conscious of how he shares stories about communities like the Cholitas. “I know that they need to be telling their own stories and take control of their narratives. I’m trying to infuse something of their culture into it and not just place my viewpoint or my thoughts [on the work],” he explained.

Todd hopes that with these photographic series, people will see “a different side to how we’ve been told to digest these people, places, and things through stereotypical visual tropes and clichés.” He continued: “I think it’s really important to change perceptions of how people view countries like Bolivia and cultures like the Aymara,” he explained. Todd, himself, had one of these ‘perception change’ moments during the photoshoot when he realised that one of the Flying Cholitas was a transgender woman. “In that society, I didn’t expect it, but it was so cool to be enlightened about something that I hadn’t even considered,” Todd said.

The New Zealand photographer has some new projects in the works, like shooting a film in Sierra Leone with footballers who lost limbs during the Civil war. That said, he’s not done with the Flying Cholitas or the Cholitas Escaladoras. He wants to shoot a film with both groups of women, so they can tell their own stories about their culture, history, and athletic pursuits. Todd believes a film can do something that his photo series has begun: inspire girls and women worldwide to wrestle for what they want and climb the tallest mountains.“I’ve got a six year old daughter, so I’ve always wanted to show her that anything’s possible anywhere in the world,” he said. “I want [women and girls] to see positive role models to prove it’s not just a man’s world.” 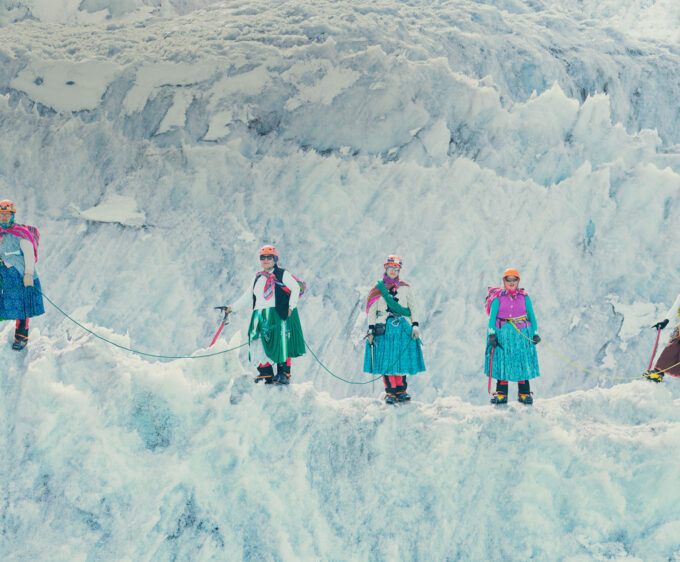 The word ‘Cholita’ had previously been used as a derogatory nickname for the Aymara women of Bolivia. Todd Antony photographs a marginalised female tribe of climbers fighting back in their own way – and reclaiming the word 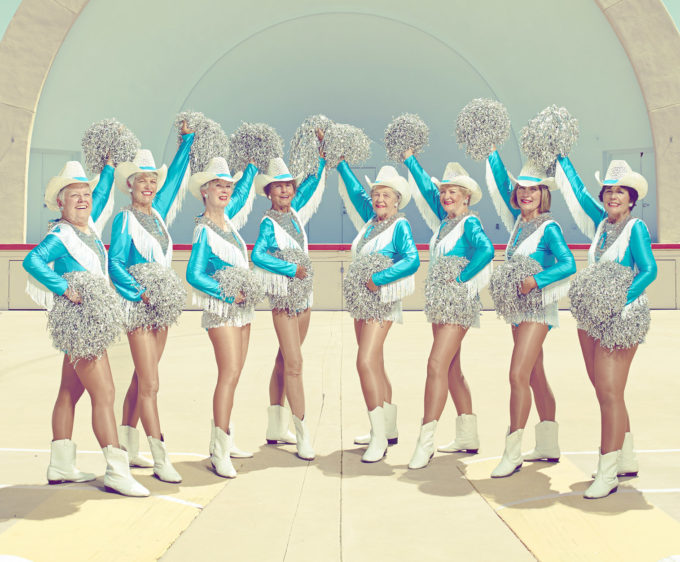 If you view cheerleaders as young, enthusiastic women, then think again! We meet the inspirational Sun City Poms, a retiree cheerleading troupe from Arizona who subvert the perceptions of ageing 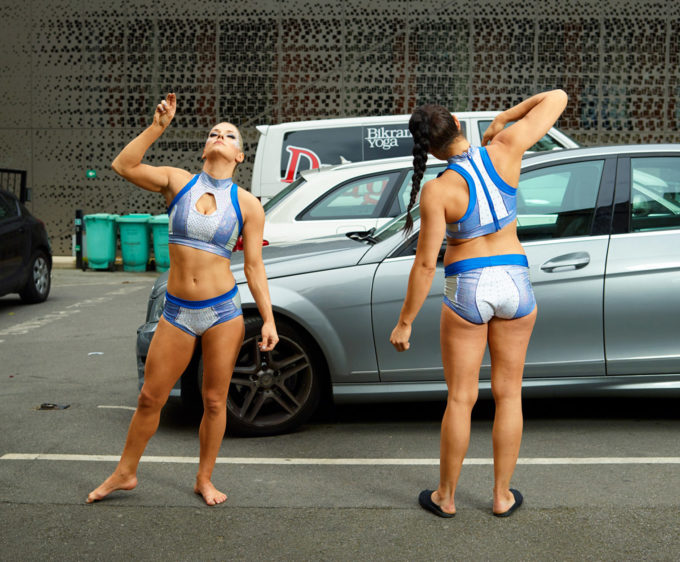 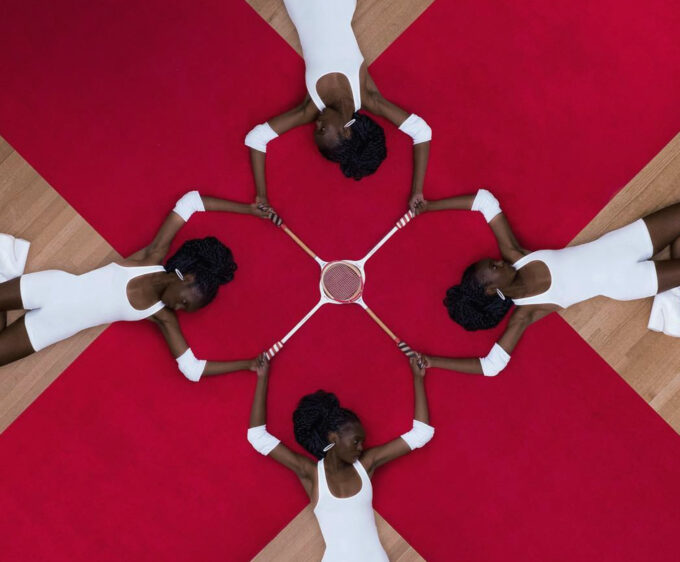 We speak to photographer Brad Walls about his new book, Pools From Above, and his amazing skill to develop beautiful, symmetrical drone photography with female athletes taking centre stage