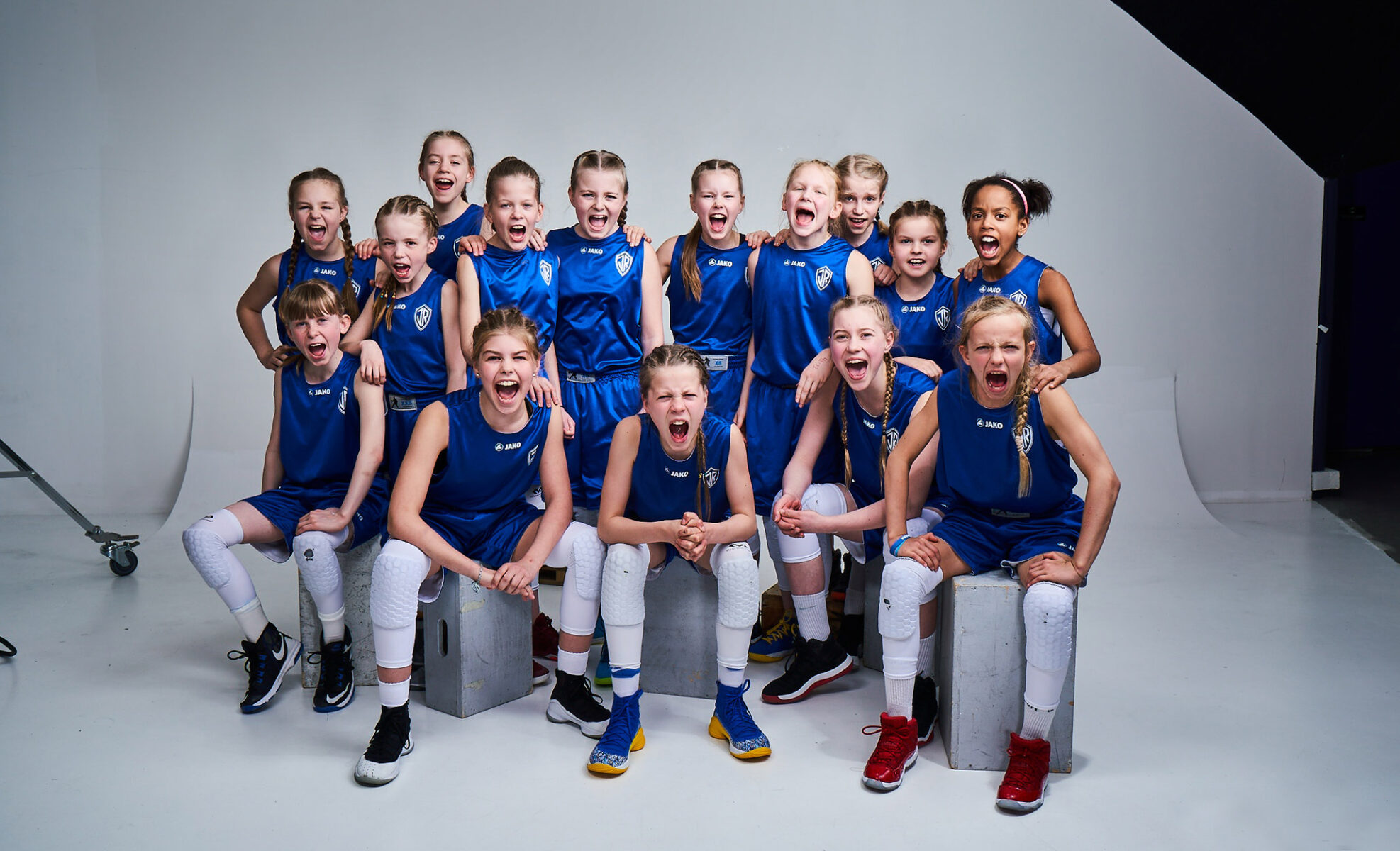 A documentary film, Raise The Bar, shows how an Icelandic girls’ basketball team and their unconventional coach makes a stand against gender parity

Defiant and composed, the group of young girls on stage dressed in their team basketball kit, wordlessly take off the medals they’ve just been awarded and drop them unceremoniously onto the ground with a clatter. They file off the stage amidst a mixture of scattered applause, bafflement, confusion and even anger from the gathered crowd. It’s a defining moment, not only in the documentary film, Raise the Bar, which charts the progress of an Icelandic girls’ basketball team and their unconventional coach, but in the lives of these young players who were subjected to vitriol due to their perceived disrespect towards an institution that wouldn’t allow them to play against their male counterparts

“[A lot of people said] Brynjar was brainwashing us. There was a lot of negativity,” recalls Eybjört Torfadóttir, 15, who was part of the Club IR team and onstage that day in 2019. Brynjar Karl Sigurðsson is the controversial coach in question, and a mesmerising force in the film as we, the viewers, join him courtside and follow him on his journey to fight for gender equality in basketball. He’s a divisive character and instantly it’s clear, from the first scenes we see of him shouting at the young players, that his methods are unorthodox. His language is blunt and his delivery is direct, but what the film goes on to show is a tireless passion to build not only great athletes, but strong humans capable of standing up for what they believe in. 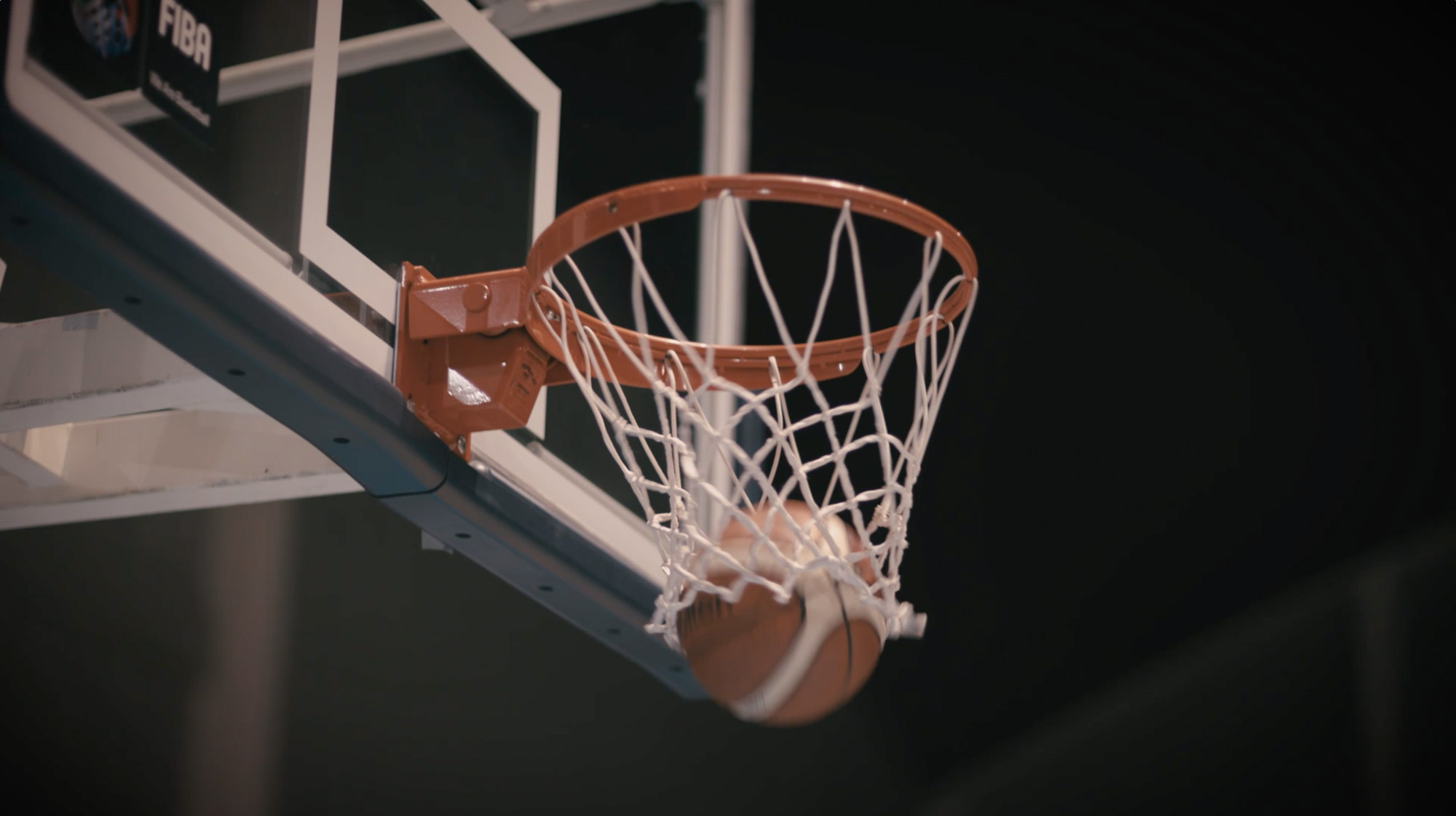 Raise The Bar, produced by Sagafilm in Iceland.

“I met Brynjar through a mutual friend in October 2015. I learned a little bit about his background and he struck me as a highly interesting character,” remembers Guðjón Ragnarsson, director of Raise the Bar. Shortly after, he went along to watch Brynjar coach and it sparked an idea: “I watched the entire practice with my jaw to the floor. My gut feeling was that this needed to be documented.”

What followed was a project of dedication, with Guðjón and his crew following the progress of the girls’ team day in day out over half a decade. Under Brynjar’s guidance, the youngsters quickly dominated their own league and so asked to play against the boys’ teams at an upcoming tournament. They were met with resistance and hostility, a shocking development – albeit sadly predictable – in a country that prides itself on gender parity. “Some parents would come up to me and ask me if I thought it would be funny for their son to be beaten by a girl,” recalls Brynjar, shaking his head. It underlines the all too real prejudices and toxic attitudes that permeate society. A poignant message in the film is relayed via the father of one of the young girls, who cuddles next to him playing on his phone as he speaks: “The problem is, that boys think losing to a girl equals losing to some inferior being. This gets driven into their consciousness from many directions. I believe that if we’re going to change something – because I believe in equality – we start there.”

“The girls inspired me,” explains Guðjón. “Their dedication and the way they reacted to stimuli was something I had never seen before. I was also inspired by Brynjar’s focus and determination to empower them.” The strength, resilience and confidence of the girls is striking on the screen. It’s all part of the teaching from their coach, who values building players who can face challenges on and off the court with the same tenacity. But doesn’t the negativity of detractors ever get to them, I ask? “I don’t really think about others’ opinions,” says Gréta Melsted, 14, coolly. “I just do what I think is right.” Eybjört adds: “It’s like Brynjar taught us: ‘no one can hurt you without your permission’.”

The film rightly shines a light on the hypocrisy of sport institutions and organisations that pay lip service to gender equality but in reality, fail to follow through with tangible actions. But it’s also a bigger story that eclipses the world of sport, explains Guðjón. “This film started a very needed conversation in Iceland after it premiered: some were healthy conversations but some were hostile.” “This is not a film about what I think is right or wrong but a portrait of people who are unhappy with being disrespected and are doing something about it.”

Tanja Brynjarsdóttir, 14, says she didn’t think that people, especially some of the parents, would be so mad after their protest. “It was never about us,” she says with clear frustration, describing how a lot of the attention focused on Brynjar, her father and coach, with some believing that they had been forced into dropping their medals by him. The girls are defiant – they may be young but they know their own minds.

In Iceland the medal drop and subsequent fallout were headline news. The release of the film, at select film festivals across the world, has been a welcome progression for the girls who are now teenagers, with some having been as young as seven years-old when filming first began. “I felt really happy and a bit emotional seeing the film, because it was tough during that time,” explains Greta. Tanja and Eybjört both say there was a sense of relief for them when they first saw themselves and the events unfold on screen. “There was so much false information, so I felt relieved that people could see how my dad really is,” shares Tanja. The girls have continued to play basketball and are still coached by Brynjar as part of the Athena team.

A talented basketball player himself in his youth, it was seeing the sport through his daughter’s eyes that was a real catalyst for Brynjar: “When she started to play [basketball] I started to look at what was awaiting her and I didn’t like any of what I saw there. We had to do something.” His approach towards coaching the girls has received its fair share of criticism as well as praise. “A lot of people say to me ‘why do you coach these girls like boys?’, and that’s a funny question because I don’t think of it like that. I’m just coaching athletes.” In our chat, I’m struck by how relaxed, calm and full of smiles he is. It’s a side that you don’t see so often in the hour and a half documentary film, with its dramatic and intense air.

“He [Brynjar] is putting obstacles in front of them for them to deal with, and the first time I saw this I thought this is a programme that all girls should go through and then spare themselves the agony of somebody with issues shouting at them later in life,” explains Margret Jonasdottir, a producer on the film. “He’s teaching them how to take space, be loud, be heard, how to find their own limits and maybe cross them. He’s also teaching them not to borrow other people’s values, which is so important in life.” 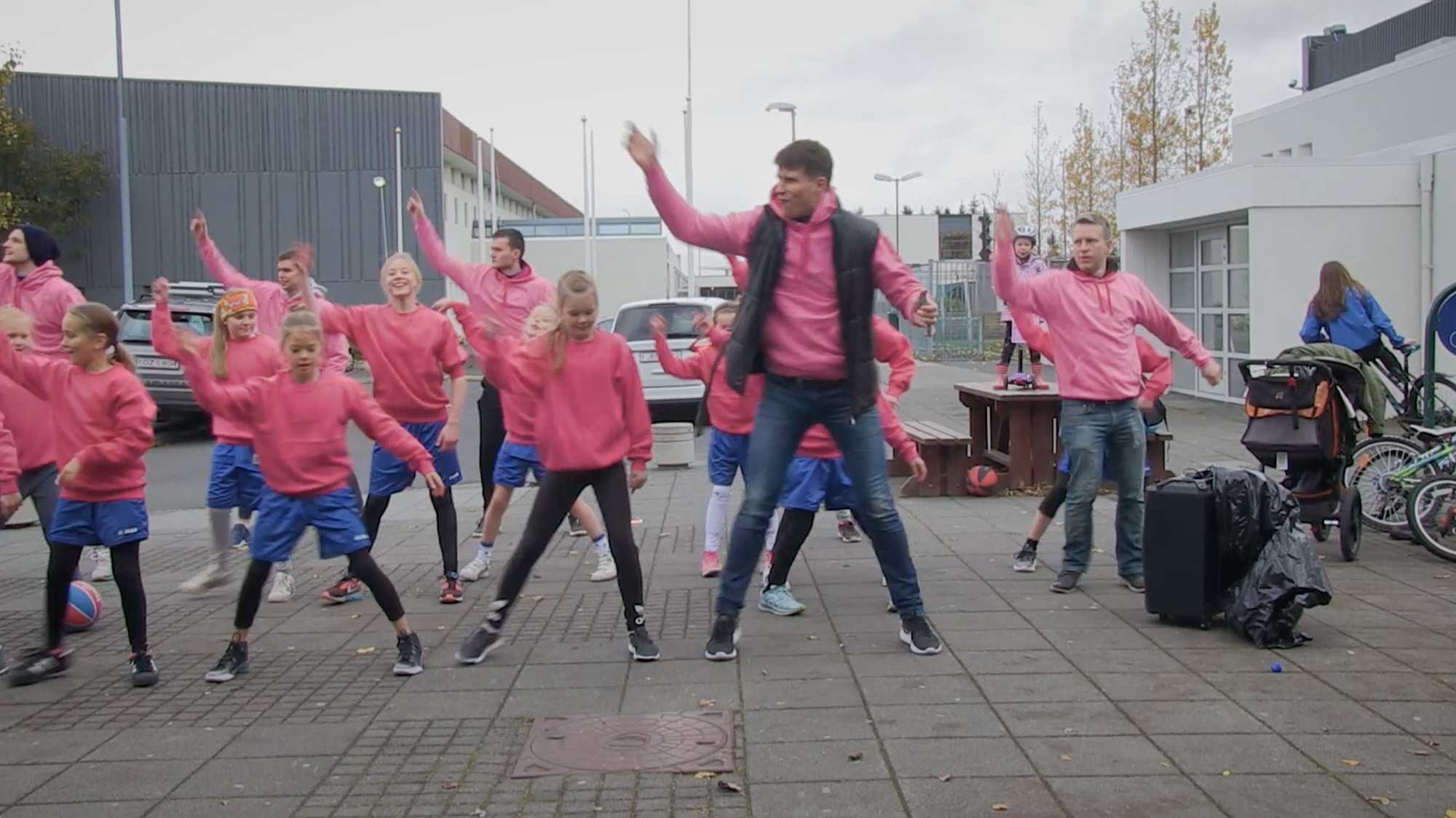 Although the film focuses heavily on a particular set of events in Iceland, the film speaks to a wider, global audience.

She describes how, although the film focuses heavily on a particular set of events in Iceland, the film speaks to a wider, global audience. Sean Carey, a US filmmaker who is involved in a follow up to Raise the Bar, agrees. “There’s all these other layers to it… Brynjar has been this bold antagonising figure that won’t accept the status quo anymore.” Likewise, filmmaker Ágúst Þór Hafsteinsson, says, “What struck me when I started documenting Athena’s journey were all the lessons, and the depth of those lessons, that you could mine from the story. I immediately knew I wanted to make this into a series. You need time to delve deep into Athena’s philosophy. The story has only just begun.”

Margret believes the film forces you to make a stand: for or against. It’s certainly true that the film, like Brynjar’s teachings, makes you face up to feelings of discomfort. If you’re left uncomfortable by the girl’s boisterous behaviour courtside, why is that? If you squirm listening to Brynjar shout, is it the words that get to you or the tone? And is it because it’s directed at girls? These are themes we’ve seen time and time again, in various other sports and generally in the wider world.

What is it that the girls hope viewers will take away from the film? “Girls and boys should be equal, in basketball, and in general,” says Eybjört. She also hopes it will teach others to stand up for what they believe in and to never give up. “It’s not just about girls, it’s also about how people look at children,” adds Tanja. Eybjört nods: “We’re much stronger and can deal with much more than a lot of people think.” It’s a principle that Brynjar strongly holds dear: “I have so much faith in these girls. We’re so about the tough times.”

You can watch Raise The Bar  here

Raise the Bar – Produced by Sagafilm in Iceland Distributor Cat&Docs 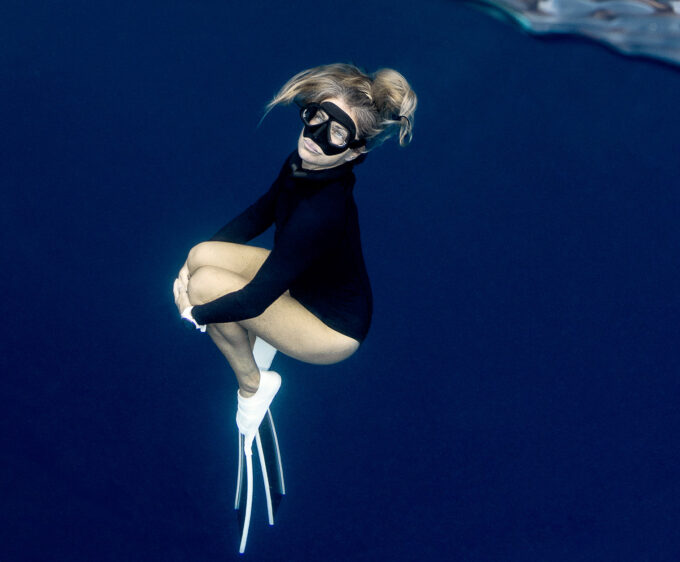 Ruth Osborn swapped a career in the public sector for a life in Ibiza to follow her love of water, which led her to become one of the UK's best freedivers 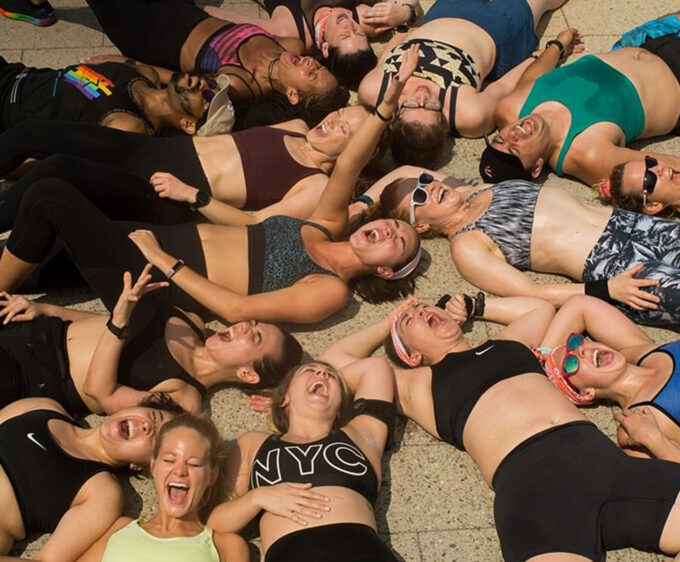 Ditch the diet culture and run for joy. That is how Kelly Roberts approaches running with the Badass Lady Gang, a community she founded that gives women a safe haven in the fitness space 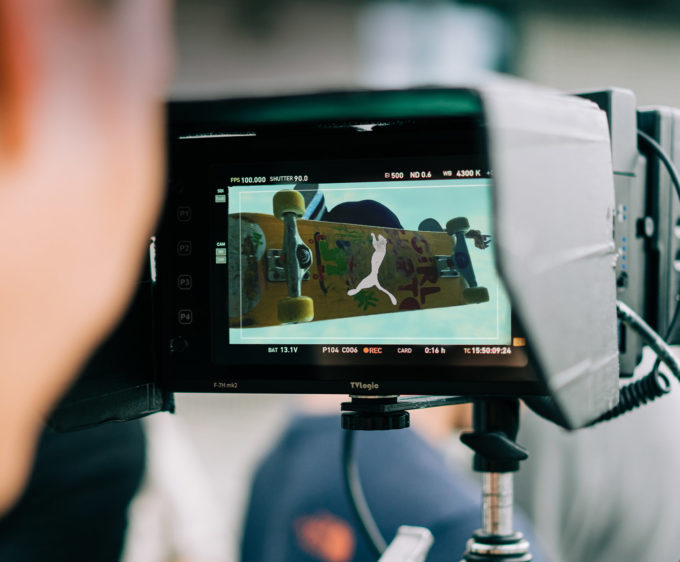 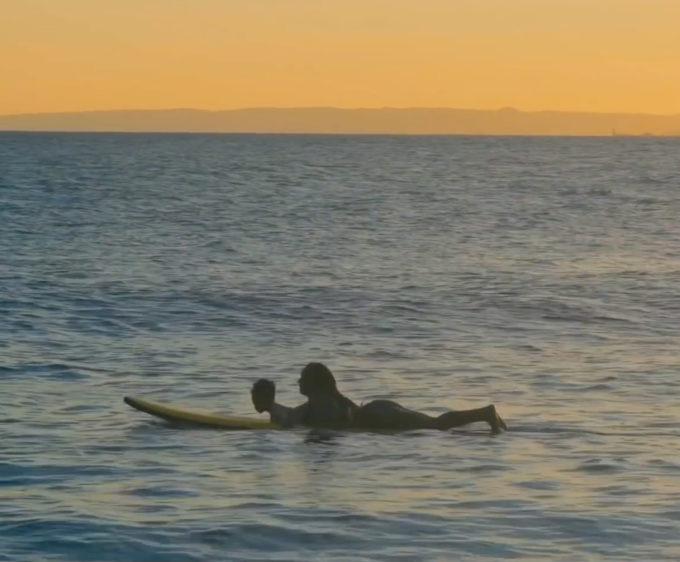 Documentary directors Joya Berrow and Lucy Jane make an impact with their dramatic short films. Surf Girls Jamaica is one such tale. We talked to the couple about their work and what drives them