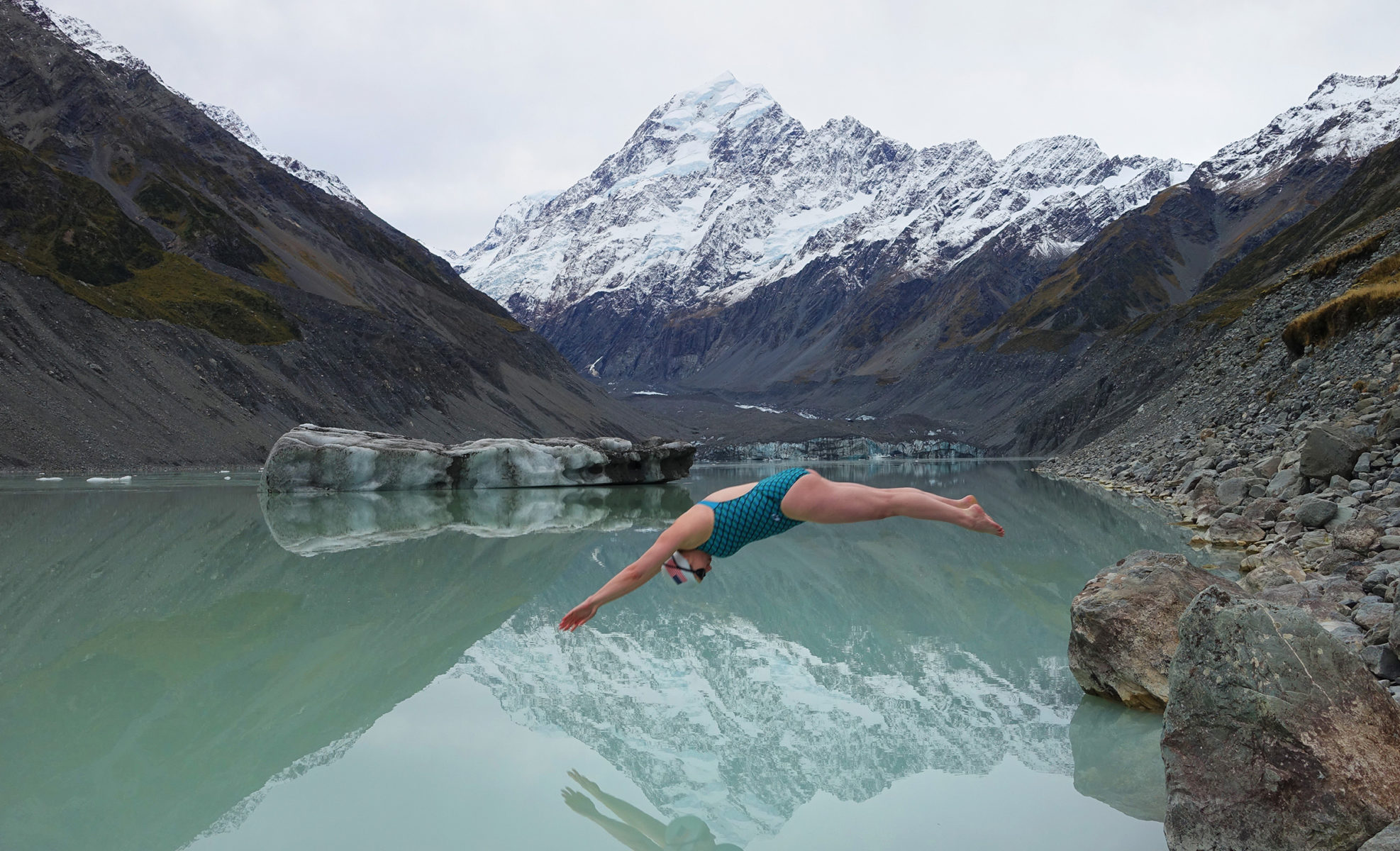 Breaking The Ice With Jaimie Monahan

“I work with the water, not against it.” Manhattan’s famed ice swimmer Jaimie Monahan talks about her attitude to swimming, and why it works for her

In the world of competitive sports, we’re familiar with people pushing themselves to extremes. Speed and stamina is one thing but ice swimming requires a rare type of humility. According to Jaimie Monahan, the world’s first female ‘Ice Zero’ swimmer, gung-ho competitiveness could be the downfall in her race of choice: “Ego can get you into trouble. I don’t have anything to prove.”

True to the image that she has built around this mind blowing hobby, Jaimie’s skin is almost translucent and smooth as, well, ice. The New Yorker has a natural composure, which clearly works in her favour when it comes to swimming in waters below zero. Although she wouldn’t call herself an athlete, the sport has been a big part of Jaimie’s life since a young age, but it wasn’t until her late twenties that she discovered open-water swimming. Soon after, she joined online communities where she competed in swims all around the world. This led her to the English Channel in 2009, followed by Russia, Finland, Argentina and more. In 2016 and 2017, she was voted ‘Woman of the Year’ by the World Open Water Swimming Association and was chosen as an ambassador for the ‘SpeedoSoul’ campaign in 2019.

In 2018, Jaimie broke the Guinness World Record World First as the first person to complete the Ice Sevens Challenge, where the water temperature was under 5°C and she tallied up one-mile swims on all seven continents. In the ice swimming world, this is the pinnacle of the sport right now: “Even several years later, there is only one other person who has done it,” she says. In 2019 Jaimie completed the first ever non-stop solo Quadruple Manhattan Circumnavigation swim. The first time this has ever been done, the feat earned her the title of ‘Queen of Manhattan’.

As for life on dry land, Jaimie is the US Campus Recruitment Manager for Scotiabank. I ask if she draws any parallels between the corporate world and her aquatic endeavours. “I look at everything as training,” she says. During intense periods of work, Jaimie can only catch a few hours of sleep a night. As someone who’s familiar with sleep deprivation, this has put her in good stead for long distance swims that can take over 30 hours.

Typically, Jaimie tells me, the ice swimming community is divided into two types. There’s those who follow a culture of wellness and celebrate health, then there’s those who see it as an opportunity for “macho” bravado. However, Jaimie proves that this isn’t the way to win. “Some push themselves so hard that they pass out. I have a different approach,” she says. “There are people who treat it like gearing up for battle, they’re fighting the water and the elements. I work with the water, not against it. I feel like it supports me.”

As far as she’s concerned, she becomes part of nature. For this reason, she never wears a wetsuit because she likes to feel the sensation of the water on her skin, but insists, “I’m not a purist if that’s what someone chooses to do.” Blending in has its perks; penguins have been known to lap Jaimie as she swims in Antarctica and a lonely turtle once joined her Manhattan loop.

When it comes to preparation, it’s mainly hydration and sleep. Normally, she won’t drink alcohol for 24 hours before a swim and also limits her caffeine intake. Sugar hits before and after  a swim are essential and she drinks an energy supplement every 30 minutes when in the water. Jaimie tells me that the hardest part is the first dip: “I have to get in quickly and shoulders must be submerged fully before we start. It’s part of the mental game. I always feel a huge sense of relief when I can start moving.”

Unsurprisingly, she’s a yoga fan and applies a lot of yogic practice to her swimming, “I just show up and breathe through it.” When in the water, she relies on the common phrase used by instructors to “check in” with herself. It usually takes her 26 to 35 minutes to complete one ice mile.

“I check if I can still feel my hands and I monitor the colour of my skin. Blue is a warning sign but pink is healthy.” In terms of the mental tricks she’s taught herself, it’s counting up and down, or figuring out the percentage of the distance she has left. Afterwards, she embarks on the lengthy process of rewarming. “I get into a space where I can dry quickly, drink tea and just let my body shiver it out.”

On top of training in pools and open water around Coney Island, Jaimie commits to regular HIIT training. But she has always seen swimming as long term.“It’s a great sport for older people. We often see newcomers who have found swimming later in life – even aged 90.”

Much to my surprise, Jaimie has persuaded a few friends to join her in the water. Her top tip for beginners? Start in the summer and commit to a weekly swim then follow the seasons by “riding the thermometer down” as she puts it. Most people bow out when the winter season hits, “I change their latitude of acceptance of what’s considered cold,” she says, with a wry smile.

As someone who adores New York, Jaimie was never tempted to move to the countryside, where other swimmers practice in peaceful lakes. For her, part of the beauty of ice swimming is the contrast of total silence compared to the chaos of the city. “I need both,” she says. Her favourite route is the sunrise to sunset 28-and-a-half-mile loop around Manhattan, which reminds her never to take the city she loves for granted, “People forget it’s an island!”

To this day, she has totalled 31 loops (one double in one day) over the course of 10 years, making her the record holder. Yet she still insists: “It’s a moving meditation, not a competition. Every time I do this swim I see something new, experience something different.” The goal wasn’t to hold the record; she wanted to complete as many laps as possible because it gives her the chance to commune with her island. It’s about revelling in the dichotomy of New York City’s epic skyscrapers, hectic traffic and frantic energy, whilst being carried by the waters that she calls home. 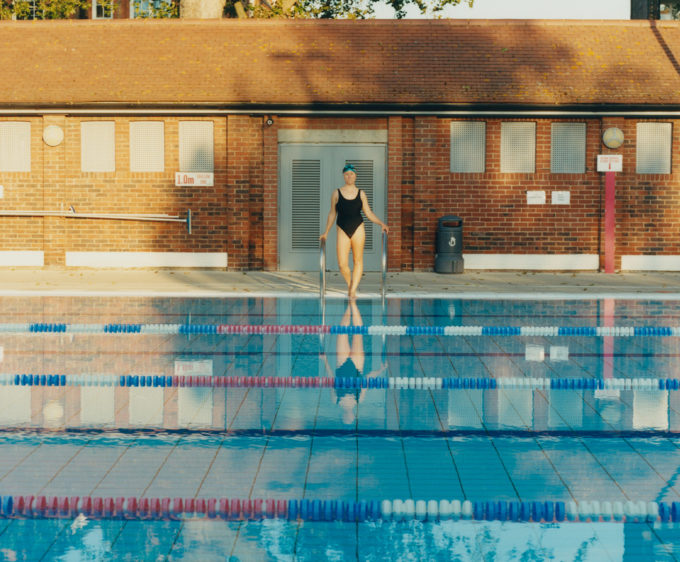 Women are discovering the benefits of swimming outdoors for their health and mental wellbeing. A new gallery of portraits by Nikki McClarron for WaterAid celebrates those who are taking the plunge 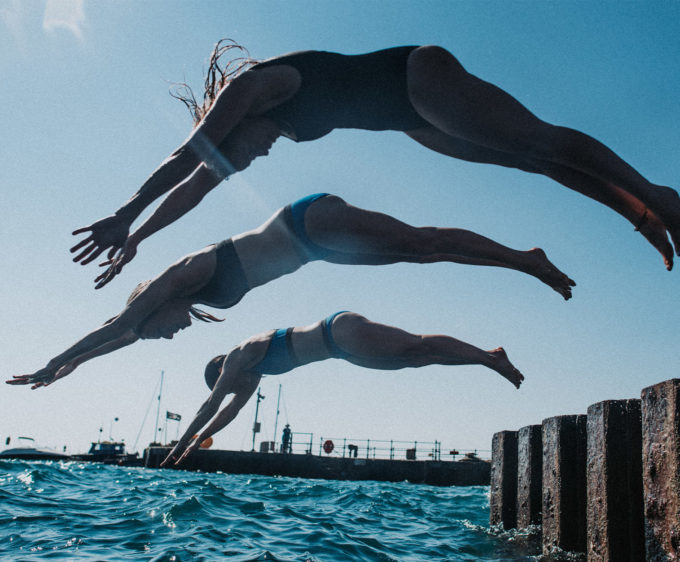 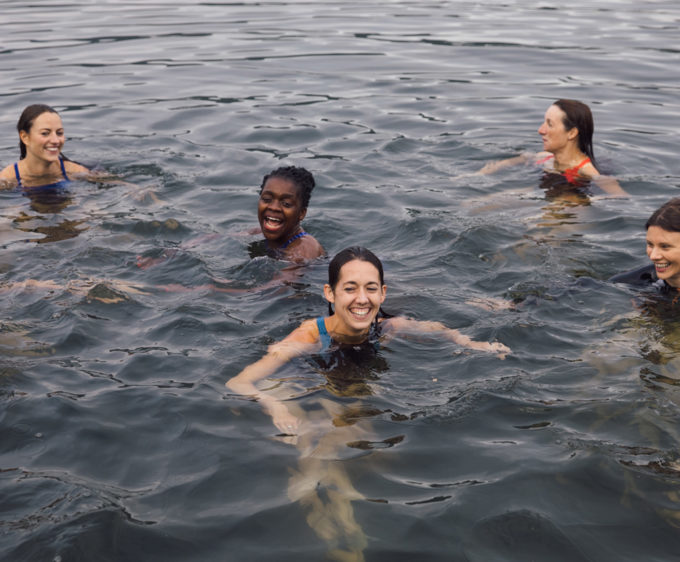